Behind our hidden emissions lies a huge opportunity

In Australia, the emissions generated while buildings are in use are set to decrease as the country’s electricity grid becomes increasingly renewable. However, the emissions locked in during construction and demolition are not. 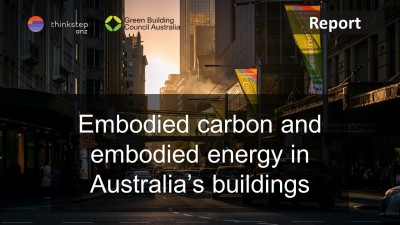 Without deliberate action, embodied carbon — the emissions generated during the manufacture, construction, maintenance, and demolition of buildings — will be responsible for 85 percent of Australia’s built environment by 2050 according to a joint report by thinkstep-anz and GBCA. Also known as ‘hidden’ emissions, embodied carbon is often not considered when calculating the built environment’s carbon footprint.

Generally, the main focus of such studies is on ‘operational’ carbon — the emissions generated by lighting, heating, or similar processes. While the share of renewable electricity in Australia’s will help to lower these emissions,  the embodied emissions will require targeted action as they are not directly linked to electricity use.

“The project provides a robust baseline for embodied emissions at a national level – emissions that have been largely overlooked to date. This allows the building and construction industry to track progress over time in reducing its emissions.”

The latest report by the Intergovernmental Panel on Climate Change (IPCC) highlights the need for greater global efforts in reducing emissions. The IPCC report is a code red warning that temperatures are likely to rise by more than 1.5°C above pre-industrial levels within just two decades. “The challenge of decarbonising our built environment has never been more urgent,” says GBCA CEO, Davina Rooney.

The joint study by thinkstep-anz and GBCA quantifies the increasing role of embodied carbon in the Australian built environment’s carbon footprint and presents collaborative strategies to reduce them. The study involves contributions from all major construction material categories as well as from large construction companies.

thinkstep-anz's Technical Director Jeff Vickers, also one of the main authors of the report, rounds up the main findings in a short video. Watch the video with subtitles here.

The study is clear about the change required at every level:

Decreasing building emissions is not an easy task but it is an urgent one.

“The decisions we make today will have implications and impacts for decades to come.”