A life cycle assessment of NZ mussels and oysters

A Life Cycle Assessment (LCA) comparing the sustainability performance of Greenshell Mussels and Pacific Oysters farmed in New Zealand with other sources of dietary protein.

Our analysis included the carbon footprint of shellfish through the stages of:

The carbon footprint of shellfish differ between the types of products

The carbon footprint of mussels and oysters across their entire life cycle depends on the type of products they will become — frozen half shell, live, or potted meat. 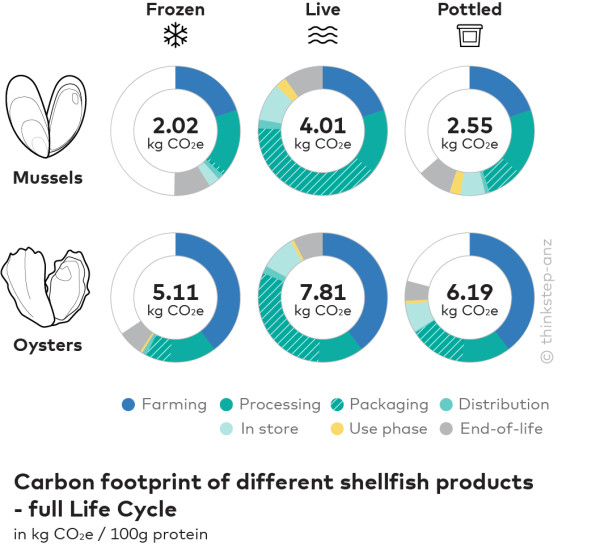 This is due to differences in:

Our study compares the carbon footprint of producing 100 grams of mussels or ousters protein to producing the equivalent amount of  range of dietary proteins.

We utilised a ‘cradle to domestic retail’ approach which covers all stages from farming to retail for the comparative part of the study. Life cycle stages after production — international distribution, consumers’ cooking preferences, and the disposal at end-of-life — introduce a high level of variability and therefore, were not included in the comparison. 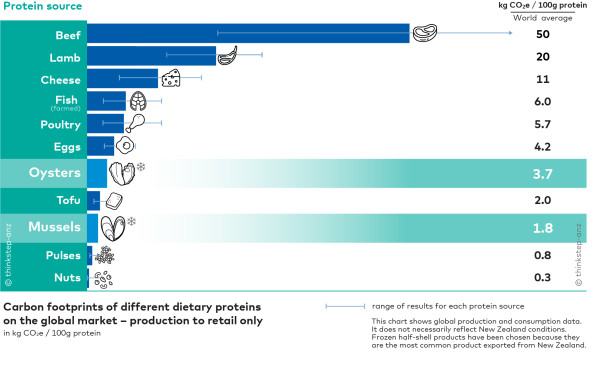 The results of this LCA study provide Aquaculture New Zealand with the data they need to back up the environmental performance of their shellfish products when compared to other forms of animal proteins.

We also highlight the actions that bring down the carbon footprint of New Zealand shellfish even more.

Get the main findings of the LCA study our case study "A life cycle assessment of mussels and oysters: In a nutshell” below.